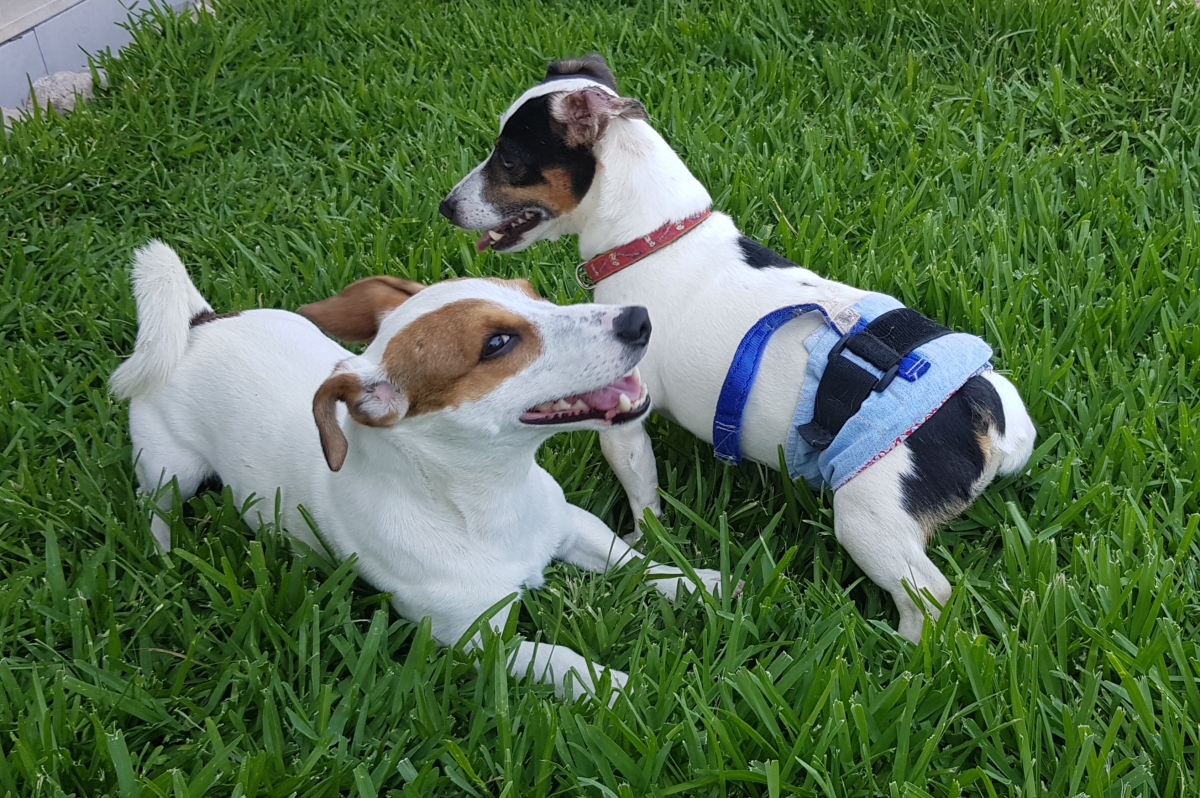 Just as we get off our Coco to walk to the Filoxenia Pool Bar, Stuart is standing in front of us with little Jack by his side. At this first reunion since half a year the Jack brothers are not overflowing with enthusiasm to say the least. They sniff at each other for a moment and then seem to pay more attention to us and their environment. I had imagined something else, something with more violin music, so to speak. After all, they have lived together for more than six years with their first boss.

We drive with Stuart to his Filoxenia Pool Bar. It is a hotel / bar with swimming pool and is located just outside Katelios in a beautiful setting. Little Jack is inseparable from Stuart and is therefore always present here. In addition to not being able to live without Stuart for more than two minutes, little Jack also has an incontinence problem, a tail that is cut too short and he has difficulty walking. He jumps a bit like a rabbit and then loses a drop of puddle with each little pup. Hence the self-designed diaper system that he always wears when he’s inside. Little Jack has also fallen into the pool once and appears to be unable to swim. Maybe it’s good that his brother, and not he, has become a “seadog”. Despite his handicaps, little Jack does not allow himself to be bullied around by his big brother. On the contrary, Captain Jack regularly looks at me like he’s trying to ask me ‘what the hell is going on?’

Many of the English guests are already aware of our arrival and would like to meet the brother of ‘their’ Jack, ‘our’ Captain Jack. In the meantime, their little Jack prefers to sit on his favourite spot: his chair with a basket behind the bar.

It’s a bit confusing, two brothers who are both named Jack. Once they each had a different name, but after their adoption this changed. We were told at the time that Captain Jack had no name and that we had to come up with one. We called him Jack to find out the next day when he was picked up that his real name was Russell. Not a good name we thought and we kept it with Jack. Little Jack was actually called Riou (or Piou, something confusing with the Greek alphabet) and Stuart and Allison didn’t think that was great either. Just as unimaginative as we are, they also called him Jack. Hence …

In the evening we go back to the Pool Bar. It is Friday evening and time for the weekly pub quiz. The proceeds always go to ARK, Animal Rescue Kefalonia, the shelter where Jack & Jack have also been for a few months. We have some difficulties with the cryptic questions in the English language, so we finish last, but we do win the poodle prize. And then we also win the € 15 grand prize with the lottery. The prize falls on a number that we did not choose, but Allison used for our Captain. Surely there will be no fraud involved? What does it matter. We will put the price in the ARK pot anyway.

It is busy and pleasant and the evening brings the weekly yield for ARK to around € 500. This money, which is normally used to build up a supply of food and medicines for the winter period, is now urgently needed to replenish daily food supplies. Normally there are enough donations for current affairs during the tourist season, but for unclear reasons this is not the case now. Stuart tells us that ordinary dog food alone costs around € 5,000 a month. In addition, special food, medicines and cat food are added. He immediately transfers the proceeds from the past 2 weeks, around € 1,000. So they can barely make a week ahead of that. The shelters do not receive any money from the Greek government, so they are completely dependent on donations. There are now about 250 dogs in ARK. Fortunately that’s a lot less than a year ago, when there were still around 350. And then of course there are the cats. It makes me sad that the people of ARK do their best to look after the animals and have to beg for money all the time.

We stay in Katelios for four days and visit little Jack every day. Slowly the brothers seem to recognize each other again. From careful browsing to really playing together. It is heart warming to see, especially since they normally both hardly play with other dogs at all. It feels sad to separate them again, although they both seem completely in place, as it is now.

Saying goodbye always hurts a bit. It was a very special meeting, both for the dogs and for the people. With a tear we leave the Pool Bar for the last time on Monday evening. Well, not really the last time of course. We will come back. Sometime. Because we will never forget little Jack or his new ‘owners’ Stuart and Allison. On Facebook they were once affectionately referred to as ARK 2. They offer a home to about 15 adopted dogs and at home as well as in the Pool Bar about 12 adopted cats each. In addition, they make every effort to raise money for the ARK and other shelters in Kefalonia.

Jack & Jack have been lucky. They have been adopted and hopefully live happily ever after in their new homes. The dogs and cats left behind in ARK are still waiting for their ‘fairy tale fairy’. If everyone who also loves Jack & Jack could make a small donation to the ARK, their lives will also get a little better. Giving money is easy, because ARK has its own webpage where you can deposit money directly into their account via PayPal: http://www.animalrescuekefalonia.com/contribution.php .

Little Jack, Captain Jack and all their dog and cat friends will be eternally grateful to you. And of course we will be too!