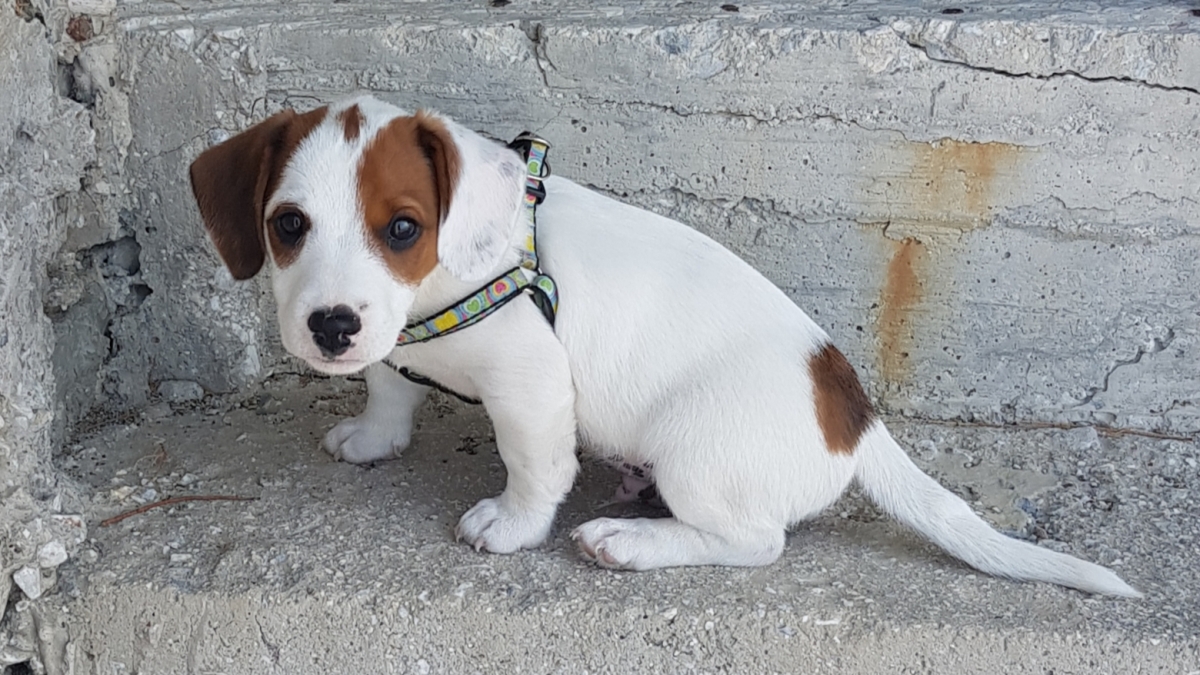 According to our French neighbor Marcel we have completely lost our senses and frankly I sometimes have doubts about our mental abilities myself too. After all, adopting a crossbreed Jack Russell puppy of about 8 weeks old living aboard a tiny sailboat isn’t an easy job. So much for peace and quiet aboard our Coco. And all thanks to our new sailor, Sammie. Sammie from Samos.

When I was a kid I used to dream of becoming a vet. It didn’t work out like that. ‘Choose science’ – the adagio for girls at the time – turned out not really my thing after all. At home we had lots of animals: two dogs, chickens, rabbits, parakeets, fish and everything else that passed by. And a large vegetable garden on a farm in the polder. Later I dreamed of spending my old age in a small house with just such a large vegetable garden, dogs, goats, chickens and a pig. For the time being, it is limited to a small boat. Without a vegetable garden, but with the whole world at our feet. Since Captain Jack has joined our crew, I secretly dreamed about meeting a second dog. And that dream came true. On Samos.

On Wednesday, June 3, we take a nice morning walk. We walk from Ormos via Marathokampos along the mountain side to Kampos accompanied by beautiful views of the Aegean Sea and the islands south of Samos. In Kampos I visit a local supermarket. Ron waits outside with Jack and is addressed by the woman from the restaurant next to the supermarket. They also have Jack Russells. A whole nest even. Then her brother joins in. He tells about a puppy that is staying at his sister’s house. Maybe we would like to take it home. Immediately I feel jaw-droppingly weak. Ron says ‘go ahead, didn’t you want that all the time?’ We mumble something about ‘thinking’ and ‘trying’ and agree that his sister will bring the puppy to us in Ormos that afternoon, so we can see how it works out with our Captain Jack.

But even before we get home, they catch up with us. When we walk back to Ormos over the beach, we see them getting out of their car further along the road. Clumsy, the puppy stumbles to us through the loose sand. I fall in love immediately. He has no name yet. We call him Jimmy, but when the sister comes back to us two days later to see how it goes, we change his name to Sammie. Her idea. Sammie from Samos. This way Samos and she will always remain in our memories.

It soon becomes clear that we will have our hands full with Sammie. In his wild moods he evokes memories of ‘The Exorcist’, the famous horror film from 1973. The only thing missing is that his head turns 360 degrees on his body. If you want to see our little poltergeist with your own eyes, click on this link for a video of ‘Sammie going crazy‘.

According to the not very empathetic young vet in Karlovassi, our Sam also has a bad character. Sam bites his hand twice after he gives him an injection and ofcourse he shouldn’t have done that. Fortunately, the neighborhood children have a very different view of our biting pup. He still has a lot to learn. Just like they do.

I myself do not believe in dogs born with a bad character. Only in dogs that have had a bad start in life. Our Sam allready has been with another adoptive family for a few days. They mainly saw it as a playmate for their young children, and ofcourse that didn’t work out. Now it’s up to us to do better and give him a great boatdog life as a sailor on our little Noah’s Ark.

In the first week, that seems to have worked out well. After the first day he is as good as toilet trained, can already walk a good bit, swims like a real boatdog and is always hungry. The Captain and he are still working on the pecking order, but mostly they seem to get along fine.

And honestly: who could resist the look in those eyes…